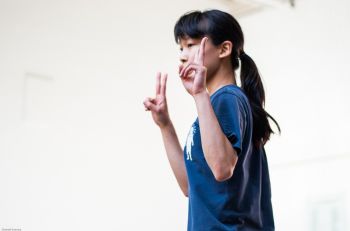 When Paolo Mangiola originally applied with Nuclear Romances, I was thrilled to see that Fukiko Takase would be performing in it; she'd performed in Devaraj Thimmaiah's Arranged Marriage, which was one of our favourite works of the previous festival. But Fukiko was not available for the festival, so Chihiro Kawasaki had to quickly learn the role, before Paolo left for Japan for a study trip funded by the Lisa Ullman Travelling Scholarship Fund.

Chihiro brought a very fresh and engaging quality to the role, and as you can see from the photos, this was a very light-hearted rehearsal indeed! It's been hard resisting the urge to post far more photos...

Nuclear Romances was performed on Friday 5 July, and you can read more about it here. 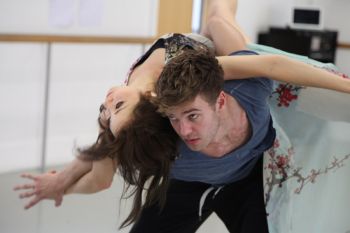 Merritt Moore and Adam Kirkham are fast becoming the most popular part of this festival, so it was wonderful to catch the start of one of their rehearsals last weekend. Merritt's friend Erica Fletcher was visiting from Texas and photographing and filming the rehearsal, so here are photos taken by her.

Merritt and Adam will be performing A Timeless Duet on Saturday 6 July, and you can read more about it and them here. 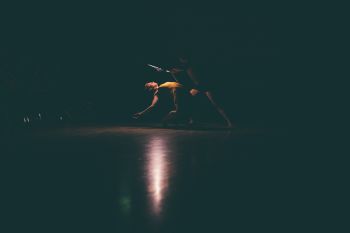 Although this is the first time Gary Rowntree, from Belfast, will be presenting work at Cloud Dance Festival, this will be his second festival, having performed at our last festival in Antony Lo-Giudice's company, then called Exquisite Corpse | Dance Theatre.

Gary's new work is a solo called The Light, which will be performed by Oona Doherty on Saturday 6 July. For further details about Gary and his work, please visit here. 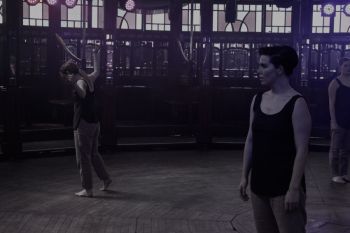 Volta is Ceyda Tanc's latest work, and it has been performed widely since its premiere at Resolution! at The Place earlier this year (on the same night as Ieva Kuniskis) including at the Brighton Fringe in The Famous Spiegeltent.

As Ceyda Tanc Dance is a Brighton-based company, there hasn't been a chance to pop down for rehearsals, so here are some photos taken by Ceyda's sister Amber Tanc at the Spiegeltent in Brighton.

Volta will be performed on Sunday 7 July, and you can read more about it here. 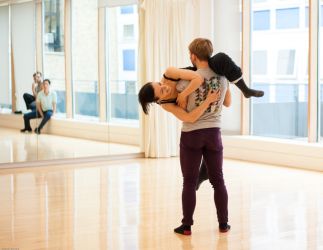 Raymond Chai is creating an as-yet-unnamed duet for Cloud Dance Festival, about the tensions and unspoken challenges in fleeting relationships. It's to be performed by Melanie López and Oliver Freeston: previously appearing in Cloud Dance Festival in December 2009 with Diciembre Dance Group, Melanie has also worked with Peter Schaufuss Ballet, Ballet Ireland and Avatara Ayuso, while Oliver has worked with the Georgian State Ballet, Peter Schaufuss Ballet and Company C Contemporary Ballet, and performed at the last Cloud Dance Festival with Sol Dans. It'll be great to have both of them back!

Raymond Chai's duet will be performed on Saturday 6 and Sunday 7 July, and you can read more about it here.

These aren't rehearsal photos so much as a photoshoot by Hana Saotome and two of her dancers, as she needed some publicity photos for Sombras do Tempo (shadows of time), which she'll be presenting at Cloud Dance Festival on Saturday 6 July.

More details of Hana and her work can be read here. 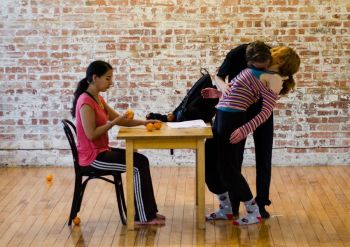 These photos were taken at Ieva Kuniskis's final rehearsal before taking Gone To Get Milk to Lithuania to perform at the prestigious Baltic Dance Festival.

As Zoe Georgallis could not join Helen Aschauer and Charlie Ford for this and other performances in Lithuania, Ieva Kuniskis took over her role.

Ieva will be presenting Gone To Get Milk on Sunday 7 July, and you can read more details here. 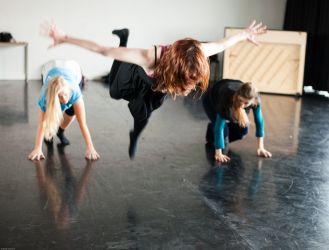 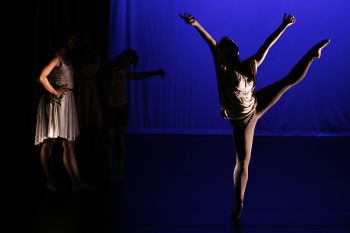 Friday 5 July. AniCo. is a recently formed company under the direction of Anna-Lise Marie Hearn. Her work has been developing over the past few years during her training at London Studio Centre. The work of the company is complex, strong and physically articulate. Anna-Lise hopes to push the future development of the company, and strives to continue to create work with AniCo.

The company focuses on creating cutting edge and dynamic contemporary dance works, with influence of traditional Turkish folk dance. Ceyda Tanc combines the knowledge gained during her contemporary dance training with the dance style of her heritage to create a unique movement vocabulary.

Friday 5 & Sunday 7 July. Ella joined Russell Maliphant Company in 2011 and has just completed an International tour with the company performing in ‘The Rodin Project’- which explores the sculptor Rodin's work using a fusion of Contemporary and each dancers individual style. She was also a paid professional in the Olympic opening ceremony 2012.

Friday 5 July. Ella Robson Guilfoyle trained as a dancer at Laban. Graduating in 2004 she has gone on to create a variety of work with an interest in cross discipline performance. Her highly physical vocabulary aims to energise and evolve, seeking new ways to use movement for storytelling.

Friday 5 July. Exzeb is a dance company founded in Belgium in 2002, which brings together people from different disciplines and backgrounds.

Saturday 6 July. Gary Rowntree | Dance based in Belfast, Northern Ireland is a dance theatre company that strives to challenge the possibilities of contemporary dance. The company works with professionally trained dancers to create and perform original choreography that is performed across the UK and Ireland. 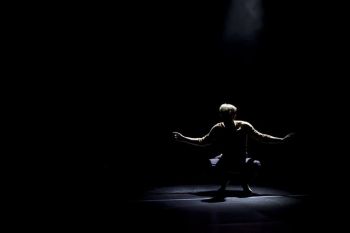 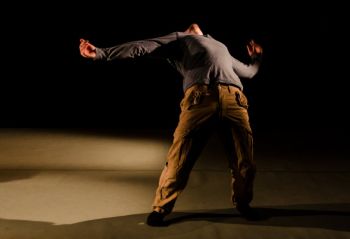