The Gender Debate At Rambert 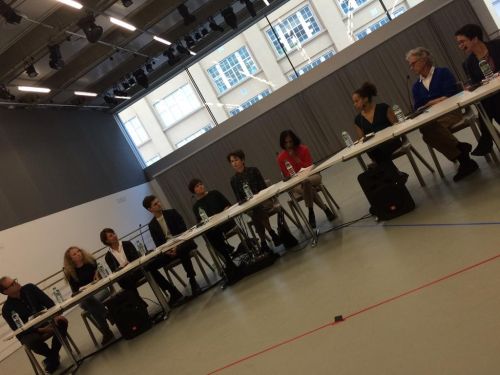 The gender debate in contemporary dance is hardly new and has not really explored in depth, but when Rambert offered their programme for their #RambertLive events, including a debate on not only female choreographers, but on how to provide opportunities and commissions for them, that seemed worth travelling 600 miles roundtrip for. In one day, no less. With blood clots.

Unfortunately, it was flawed from the start. There are three very good lessons to be learned from this debate. 1) if you only have 90 minutes and a full house for this debate, try having fewer than 9 panellists 2) ensure that all panellists adhere to the topic of the debate and 3) refresh your understanding of the term "debate". "People talking at each other" does not constitute a debate.

Certainly, Rambert could be accused of trying to overdeliver, with a panel consisting of Peggy Olislaegers (Rambert, Artistic Associate), Rupert Thomson (Senior Programmer for dance, South Bank Centre), Shobana Jeyasingh, Brendan Keaney (Dance East), Patricia Okenwa (Rambert, New Movement Collective and independent choreographer), Mark Baldwin, Charlotte Vincent, Didy Veldman and Tamsin Fitzgerald. Given the topic of the debate, not nearly acknowledgement was made of Rosie Kay being unable to attend due to a last-minute commission. This was cause for celebration, right?

Although each panel member made some valid points, when there was only 90 minutes available, there wasn't enough time available for each panel member to speak, discuss then remember to ask the audience their thoughts. And the most disappointing part of this debate - apart from the near-total avoidance of the topic in question - was the failure to engage with very important questions from members of the audience, including the grand total of one male choreographer, Cameron McMillan.

In the opening speeches, led by chair Judith Mackrell and Rambert's Chief Executive Nadia Stern, points were made that the UK's largest companies were all founded by women, that there are more female directors yet male directors control more money, and that women often end up choosing lower-profile work due to family commitments, discrimination and other reasons.

The most relevant points of the panel were made by Tamsin Fitzgerald, the opening speaker, especially when she described the playing field as "a vertical pathway, very hard to climb." She pointed out that men are regularly asked to upscale their work - i.e. adapt their work for larger venues - while women are typically asked to downsize their work, while being offered fewer commissions. As Tamsin said, something lasting, tangible and visible is needed.

Tamsin was followed by Brendan Keaney of DanceEast. As Donald Hutera later pointed out via Twitter, "@dance_east's 9-show autumn season feat just one [co-]choreog'ed by a woman"; it is a huge shame this was not picked up on and commented on during the course of this debate, nor DanceEast's preference for supporting male choreographers. Brendan's main point in his opening speech was to remind us that male choreographers are being judged in a male-dominated society according to male values; no wonder women are losing out. And this is despite all our industry's original pioneers being women.

Mark Baldwin deftly shifted the debate from the focus on female choreographers to the wider arena of equality, stating that Rambert's work is neither sexist nor racist and that he wants the company to be diverse. Yes, 10 of the recent choreographers were female versus 14 male choreographers, which is a good balance, yet Rambert does not openly identify with the gender debate issue; Rambert pursues its own agenda.

Charlotte Vincent, speaking next, spoke on behalf of the mothers within the dance sector and the need for childcare support, creches and family support, including the ability to distribute dance digitally so that company members would be able to stay at home. She also pointed out that in order to change our existing dance ecology, our underlying society would have to be changed first.

Charlotte also argued for a change in strategy for dance for young people - eg to "depinkify" dance, to encourage girls to unlearn gender rules. She also pointed out that the imbalance of women gives the men a false sense of security, while also reminding us of the imbalance of "high art" - as created by men - versus community practice, which is typically led by women.

In contrast to these statements, Rupert Thomson of the South Bank Centre reminded us that what this debate is proposing is so-called positive discrimination, asking us to what extent this level of discrimination is at the foreground of our work or behind the scenes, and reminded us that our supporters may not be comfortable with such a policy of exclusion. (I discussed these issues with a dance artist yesterday who pointed out that this level of would-be "positive" discrimination in fact disempowers women by emphasising their weaknesses and suggests they cannot succeed without special treatment).

He reminded us that it will take more effort, resources and money to effect change, and that we should review what "mastery" looks like when considering the artists who are currently midcareer and beyond.

Peggy Olislaegers, whose remit at Rambert is to explore avenues for supporting artists and creating bridges with independent artists, raised the question of if there are enough leaders ready, and that it is beneficial to keep revisiting this debate to reinforce its themes. She also reminded us that it is allowed for women to support other women; that is certainly not universal practice across our industry for women to freely collaborate with each other.

The most down-to-earth part of the panel presentations was Patricia Okenwa talking about her practice. Like many female choreographers no doubt feel, she stated that she doesn't consider her contribution to be feminine or ethnic, even though she feels she's being looked at through a specific lens. She also complained about being made to feel as though she is a beginner at choreography, when she is not a beginner at life.

Patricia came the closest to addressing the topic of this so-called debate by asking how she can nurture the hunger for her individual work, and on a wider scale, for the work of women? She also questioned how she can give her work the maximum value, and reflected on the slow pace of her artistic development because she has to factor in motherhood.

Shobana Jeyasingh, as the final speaker, stated that although gender did not play a large role for much of her career, she has observed that women are not expected to have a sense of entitlement and that they are regularly subject to condescencion, lack of credibility, needing to fight that much harder. Because of the necessary struggles to be taken seriously, Shobana felt that it can take female choreographers up to ten years longer to reach the level of their male counterparts.

She also raised the issue of intellectual laziness: of gatekeepers not having the time to question stereotypes, to keep up with how the world is changing, therefore the systems of the gatekeepers remain the same.

She rightly pointed out that issues of equality should be on the agendas of all publicly-funded organisations, which was later echoed by Julia Gleich.

After this, we entered a discussion between the panel members, as instigated by Judith Mackrell.

Despite the feminist nature of this and every other debate about female choreographers and their plight, Tamsin Fitzgerald rightly pointed out that it is important to have men as part of the conversation. While women choose not to help each other or to even talk to each other, if women were more supportive to and of each other, they could effect significant change.

Charlotte Vincent argued for insisting on change, and asked how far we should take this. She also questioned where our feminist brothers are in this, where our male counterparts are who will also speak out about this. She reminded us that women often expect to be facilitated and mentored more than men, and that women should be more confident in their voices and abilities.

And then, finally we reached the audience part of the debate - or not-debate - where the most interesting ideas were raised.

Kate Flatt commented on the visibility of female choreographers, especially considering the BBC's recent coverage of high-profile artists, and longed for someone of the calibre of Pina Bausch to receive funding, someone who can be that much in charge in our male-dominated industry.

Sally Marie gave a very impassioned speech on the need for established dance companies to start exploring ways to support independent dance artists. She offered several solutions, for example companies absorbing the cost of a security guard for one day could offer dance artists studio space for a whole day, while she reminded us of the isolating disempowering reality she faces as a dance artist, drowning in admin at home and strongly feeling the lack of joined up thinking within the industry to support artists like her.

Unfortunately, although Sally raised such important points, which engaged a number of people around her and on the panel, there was no chance for any of them to respond, as Assis Carreiro took this opportunity to lament about her own personal childcare needs, effectively squashing Sally's contribution.

As the penultimate comment of the evening, Malgorzata (Gosia) Dzierzon asked how we can use positive discrimination and prevent it from becoming laziness and box-ticking, reminding us of the importance of choreographic development programmes and how artists are now facing different economic realities than in the past, affecting styles as well as gender and ethnicity.

The most compelling question of the event, however, came from Julia Gleich, Head of Choreography at London Studio Centre, asking how such large publicly-funded organisations have no responsibility to create a more balanced representation of women in creative leadership roles: this is not about artistic direction, but about making the work, being the artist behind the work.

And so the debated ended. The gatekeepers on the panel did not defend their positions or decisions, nor did they respond to audience questions. The debate did not address the topic, and ultimately, this became yet another discussion about the woes of childcare for mothers across the dance industry. How this addresses gatekeepers offering opportunities and commissions isn't clear, but hey, that's all we had time for.

Clear your schedules for January when hopefully we'll have something far more effective on offer. In the meantime, if you have any suggestions on how women can be better-supported in dance, please comment below.