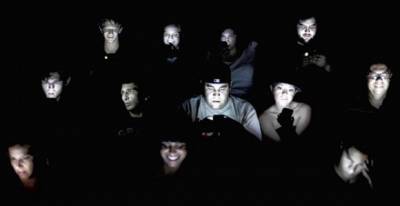 Theatres attract such diverse audiences, and yet there is one thing which all audience members have in common: a universal loathing for those people who cannot put their phone away long enough to watch a full act of a show.

It's not as though theatres leave any room for ambiguity, normally: their anti-phone stance is typically outlined on their website, cast sheets and programmes, and usually addressed in the preshow announcement. And yet we will always get those people who feel that they are nonetheless above such strictures. Oh yes, they can text, email, tweet, check Facebook and so much more during a show - and that's just for starters! And unfortunately, due to funding cuts, too few theatres have the available ushers (and really long sticks / cattle prods / tasers) to keep audience members in line.

What is the big deal, you might ask? Well, you've paid money to sit in a darkened room to watch artists perform a show which they have spent months learning, rehearsing and perfecting. You are doing this alongside other people who have also paid money to watch and enjoy a show. You should be aware of how bright the light of a phone is: not only does it disrupt everyone sitting remotely near you, but it's also immediately visible to the performers on the stage, highlighting your lack of interest and engagement in their performances to them. If you cannot be bothered to watch the show in front of you, then show your neighbours and the performers some respect and leave the auditorium until you are capable of actually watching a show.

The sad thing is that England is one of the few countries which is hyperconscious of the people around us and how our behaviour affects other people. So how is it acceptable to destroy other people's evening because we would rather sit in a theatre and text people for several hours? Or play with a phone during every dramatic climax of a show?

To be fair, the worst culprits I've seen - at Royal Opera House's Linbury Studio Theatre and at Sadler's Wells - have usually been from overseas, typically either Spanish or Italian. Is it acceptable over there to disregard other audience members or the performers while watching shows? And what are theatres doing to combat this?

And there lies the problem. I've long commented on the viciousness of audience members in Royal Opera House's amphitheatre, the unruliness of audience members in the Linbury Studio, and the extreme likelihood of being stuck near someone at Sadler's Wells who is incapable of putting their phone away. And where are the ushers to do anything about this? Nowhere to be seen. When they can be seen, not willing to get involved.

So what does it take for a theatre to actually take action on people who are ruining shows for many of their audience members, many of whom will not return because the theatre does not prevent that from happening.

I saw an incredible show tonight at Sadler's Wells by Scottish Ballet. But instead of enjoying the show, two Italian women near me chose to spend their evening playing with their phones, refusing to put them away when asked. And sadly, because this is England, nobody else said anything about them. Yes, some people thanked me afterwards for taking action, but that's too little too late.

I watch dance to be inspired and uplifted, and to cherish this industry I choose to work in; I don't watch shows to be abused and bullied by audience members, and to be left feeling upset about what should have been a wonderful night out. Part of my work involves seeing a lot of shows, so boycotting theatres isn't an option for me, so I can only hope that one of these days, theatres will finally decide to take action and stop others from ruining shows for everyone else - audience members and performers alike.